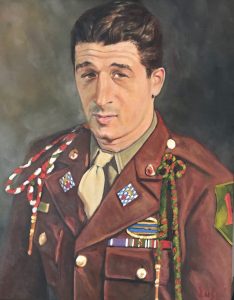 Portrait of John A. Alario, Sr. – painting by Dub Lee

John A. Alario, Sr., for whom the Alario Center was named, was born in Grand Isle, Louisiana on April 22, 1924, and moved to Westwego with his family at the age of two. Following in his father’s footsteps, John began fishing when he was twelve and eventually also became a commercial fisherman. He later obtained a position with the Jefferson Parish School System as a maintenance engineer where he eventually retired. Mr. Alario passed away June 27, 1985.

Most of his time on Bayou Segnette was spent on the Barnacle Bill working for George Persohn as a deck hand. He also shared many great fishing experiences on the Alert, a 50 by 14 foot cypress diesel powered lugger owned by his brother Antoine Alario of Westwego. After serving in the U.S. Army in World War II, John returned home and later became involved in many civic and veterans organizations. Mr. Alario married Elsie Lombas and had two sons, John Jr. and Terry.

My father was always speaking of a need for a community center on the Westbank.

Former State Representative, Speaker of the House, State Senator, President of the Senate John A. Alario, Jr. was instrumental in obtaining state funding, allowing for the construction of the Westbank’s first multi-use facility.  “My father was always speaking of a need for a community center on the Westbank,” stated Representative Alario, He couldn’t understand why high school graduations had to take place on the Eastbank. His constant discussion of the need planted the seed for the Center.

When funds were located to finance the project, it was a dream come true for all of us. It was only fitting that the man who had the vision for the Center be honored by having it bear his name. The Jefferson Parish Council recommended the Center be named after Alario and the Louisiana Stadium and Exposition District (LSED) unanimously approved the name of the multi-use facility, the John A. Alario, Sr. Event Center.

We appreciate the continued support we receive from the entire Alario Family, with special thanks to Terry Alario, John Alario, Jr. and Daniel Alario for their contributions to this article.