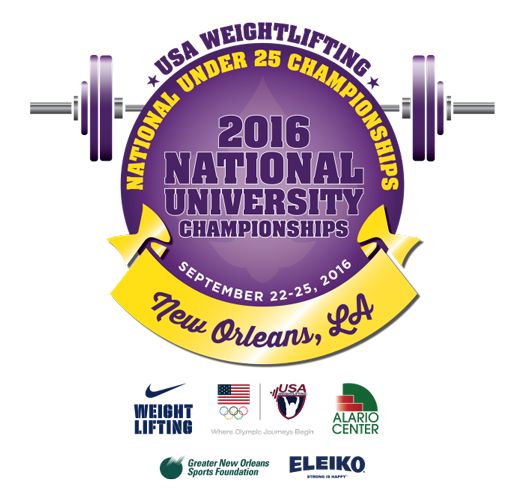 The USA Weightlifting National University Championship and National Under 25 Championship originally scheduled for River Center in Baton Rouge, Louisiana has been relocated to the Alario Center in Jefferson Parish, LA.. The River Center has become the primary shelter for those displaced in the Baton Rouge floods.  The dates remain the same from September 23-25, 2016.

“Firstly, our thoughts and prayers are with the people of Baton Rouge at this difficult time,” USA Weightlifting CEO Phil Andrews said.  “We recognize the incredibly difficult position that the city is in at this time. At the same time, I want to thank and recognize the Greater New Orleans Sports Foundation, the Alario Center and Jefferson Convention & Visitors Bureau for stepping in to assist us in very quick to ensure we had a new venue.”

The Alario Center last hosted the sport of Weightlifting when New Orleans hosted the 2000 Olympic Trials, which saw Team USA Weightlifting’s last Gold Medalist, Tara Nott, qualify for the Sydney Olympic Games.  Shane Hamman also set a new American record at 230kg (507 pounds) in the clean-and-jerk at the Alario Center during the 2000 Olympic Trials. The 2016 event will see Sydney Olympians Cara Heads-Slaughter and Robin Byrd-Goad return to the Center where they became Olympians.

The National University Championship are open to registered USAW athletes (US citizenship not required) currently registered at accredited colleges throughout the United States, who reach the qualifying total in their weight class. Athletes competing at the National Collegiate Championships cannot be younger than 15 or older than 28, as of December 31 of the year in which they are competing at this event.

National Under 25 Championship are open to athletes aged between 18 and 25, therefore born between 1991 and 1998, as of December 31 in the year in which they are competing.

Overall these competitions will bring over 800 athletes & coaches to the New Orleans area to compete with an estimated economic impact of $750,000 to the local community.  Defending National University Champions Northern Michigan University will look to defend their double title win.