Visit from the NCAA 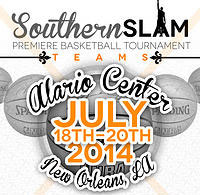 This past weekend the Alario Center served as one of three sites to the Southern Slam premiere basketball tournament hosted by Louisiana Dynasty Basketball. The three-day tournament featured regional teams ranging from Texas to Florida. If you have ever been to the Alario Center for a basketball tournament, you probably aren’t used to seeing chairs lined up along the back wall of Hall B or being able to see across all three courts so as to watch all three games at one time. For this tournament, we had a few slight changes to our typical set up in order to accomodate NCAA baskteball coaches that attended. The Southern Slam is a special tournament, because it falls into the NCAA open evaluation period. While NCAA coaches are invited to watch the games, they cannot have any contact with players, coaches, parents, etc. To stay in compliance with NCAA rules, we have designated entrances and seating areas for NCAA coaches that are not accessible to the general public. Also, every team was required to watch a video explaining the official NCAA rules to make sure each player understood their responsibilities. 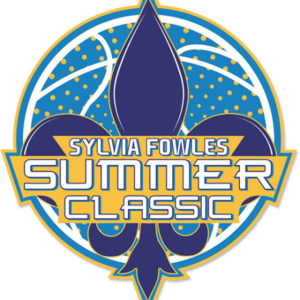 We set up meeting room 1 especially for this. We are proud to say that the winners of the Southern Slam were local teams. For more info on the results, click here: http://www.nola.com/recruiting/index.ssf/2014/07/local_teams_win_southern_slam.html

Our special NCAA baskteball set up will remain in place for a few more days. The boys had their turn over the weekend, and the girls will have their turn this Wednesday and Thursday, July 23-24, 2014. The Alario Center is holding the 1st annual Sylvia Fowles Summer Classic hosted by the Arkansas Mavericks and Miami Suns Girls Basketball Organizations. For more information, visit the tournament website: http://miamisunsbasketball.org/sylvia-fowles-summer-classic/